As a youngster, he learned why they matter while building homes with his father. He later became a system administrator and realized there weren’t tools available to automate parts of his jobs — so he started a company in 2005 called Puppet that would provide them.

“I’m career-trained to rely on tools,” he said.

But as he tried to run Puppet — a leading cloud infrastructure automation company based in Portland, Ore. — Kaines became frustrated with the lack of tools for management.

Now he’s setting out to build a solution.

Kaines is the founder of Clickety, a Portland startup that aims to help CEOs and managers keep record of their relationships and conversations with employees, investors, customers, and others. He describes Clickety as “project management for people.”

Clickety is similar to tools such as Salesforce and Outreach that help salespeople keep track of leads, but designed for leaders who spend a majority of their day interacting with folks in meetings, on the phone, or over email. Journalists, analysts, and lawyers are also potential users.

Kaines said Clickety is “the easiest way to make lists of people and to work across those lists.” 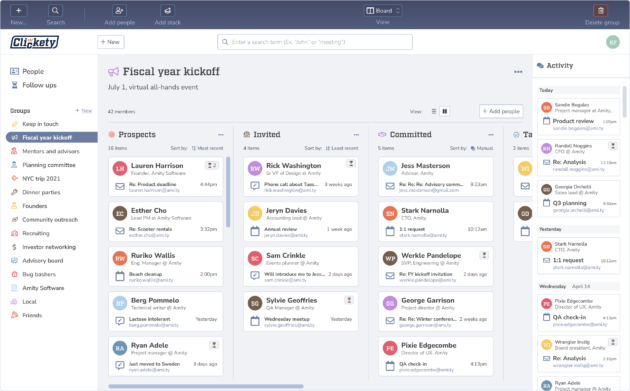 The software connects with email and calendar apps, and tracks past conversations so users can remember discussion topics, promises made, action items taken, or other key information.

“Let’s take what developers have for code, what the spreadsheet jockeys have for numbers, and let’s build that for people,” he said of the company’s focus.

In some ways, Clickety is similar to popular work management software such as Trello or Asana. But Kaines believes there’s room for another tool.

“People are one of the most important entities in business,” he said. “There should be tools — not just for people trying to close deals, but for anybody whose careers are built around people.”

He added: “Excel is for accountants what Clickety is for leaders.”

Kaines, who left day-to-day duties at Puppet in 2016 but remains a board member, founded Clickety in 2019 and raised a $2 million seed round from Founders’ Co-op, Flying Fish, Oregon Venture Fund, Liquid 2 Ventures, and angel investors including Kenny Van Zant, a longtime board member at Puppet, and Jay Simons, former president at at Atlassian. The startup employs six people.

Clickety has a few hundred users and will do an official launch later this year. The company plans to charge $25 per month or $250 per year — a high price point compared to alternative products. Kaines said the target market is managers who can afford that cost or expense it to their company. The hope is to start with individual user adoption but ultimately ink enterprise deals, he said.

GeekWire is turning 10: Seeking memorabilia from the past decade of Seattle and Pacific NW tech

FightCamp punches its way to a $90M round