Airplanes and drones today, regardless of size or fuel type, all face the same limitation: eventually they have to land.

Skydweller Aero, the U.S.-Spanish aerospace startup, wants to break free from that constraint by developing an autonomous solar-powered aircraft it says will eventually be capable of perpetual flight.

Their pitch, which helped the company raise $32 million in a Series A, has led to an additional $8 million in oversubscribed funding led by Leonardo S.p.A, Marlinspike Capital and Advection Growth Capital. The company has also entered into a partnership with Palantir Technologies to use its Foundry analytics platform to process information at-scale and onboard the aircraft designed for telecommunications, government operations and emergency services.

“[Palantir is] the best at creating value from your data, whether it’s putting data into their system to create operational insights for how we may fly our aircraft, putting data in to understand the sensing systems that are coming off of our aircraft and what those might provide, or to understand what’s coming through the networks in the aircraft,” Skydweller co-founder John Parkes told TechCrunch in a recent interview.

And Skydweller will be generating a lot of data. The company is focused on three data-rich markets: telecommunications, geospatial intelligence and government surveillance. Skydweller plans to use the Foundry platform to help its customers, which includes the government, better understand whatever areas are being monitored.

The Foundry platform will also come in handy for route and mission planning, as Skydweller intends to leverage weather and atmospheric information to ensure the aircraft can efficiently use the sun’s rays to stay in the air.

“What it’s all about is creating a persistent aerial layer or pseudo satellite,” Parkes said. “We’re focused on building a perpetual flight aircraft. The goal is to create a plane that will fly for forever, so long as the sun rises.”

Weather and atmospheric data is especially important as it will determine, in part, the altitude at which the aircraft flies. While the plane will be able to fly at high altitudes, “the harder problem and the more useful problem,” according to Parkes, is to capture enough energy and use weather planning to stay at lower altitude. Lower altitudes give better internet quality, geospatial data, and provide more power for payload, he said. 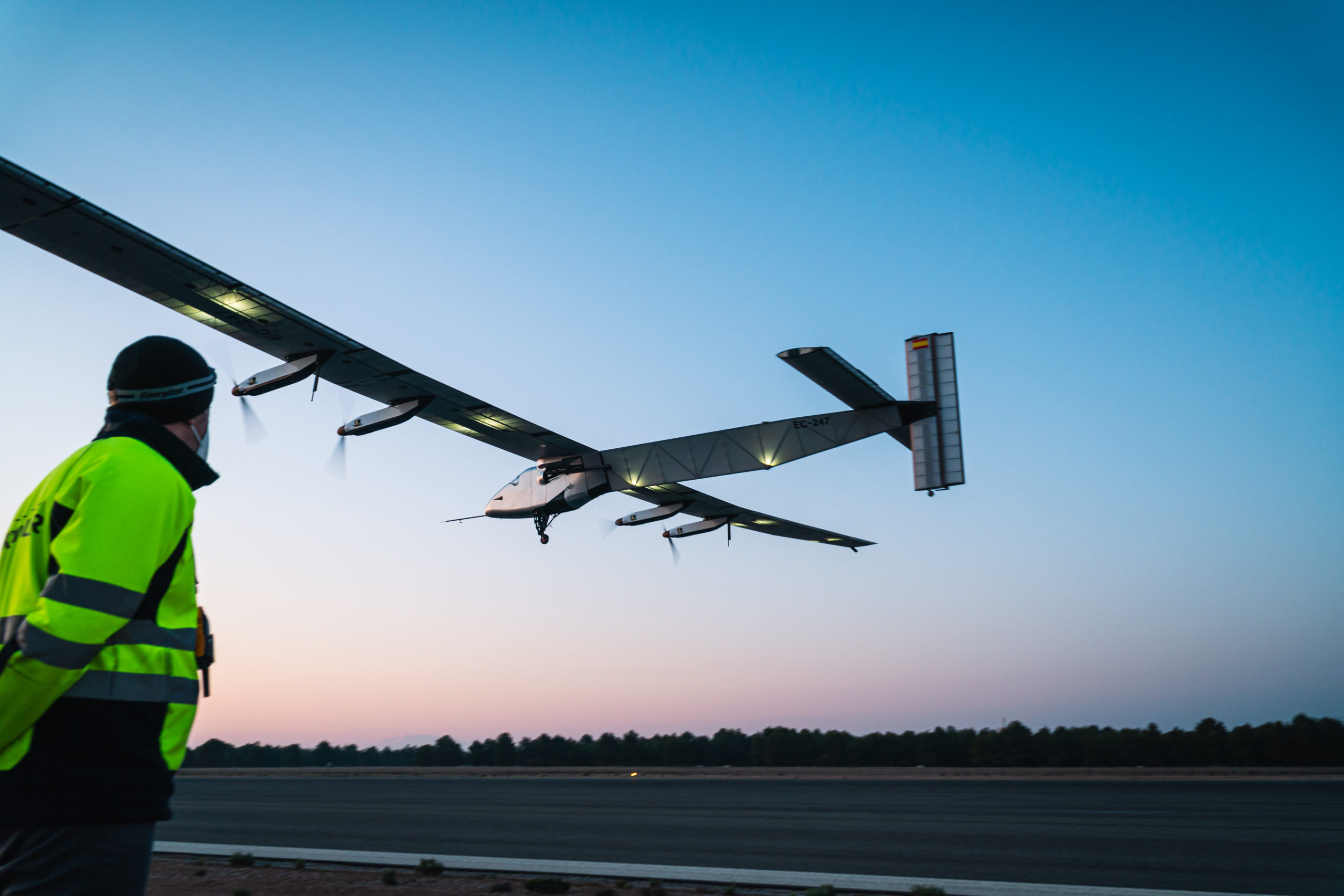 Skydweller’s tech was born out of the Swiss solar aircraft project dubbed Solar Impulse, which was helmed by Bertrand Piccard and Andre Borschberg. The project operated for 14 years and invested $190 million into the solar-powered aircraft, before the foundation behind it sold the intellectual property to Skydweller in 2019. The Solar Impulse was configured to be piloted, however, so much of the work since then has been to unman the platform and turn it into an ultra-long endurance aircraft, Parkes said.

The aircraft is all-electric, outfitted with 2,200 square-foot solar panel wings, 600 kilograms of batteries and a hydrogen fuel cell back-up power system. The solar panels aren’t only used to maintain flight; they will also power systems for customers, like a geospatial camera system or payload from a telecom company.

The company’s using standard commercial aviation parts but most of them haven’t been tested beyond a certain number of hours of use – certainly far less than the number of hours Skydweller plans to keep the aircraft in the air. Plus, like other planes built from emerging technologies, there isn’t a full certification framework already established for the vehicle

“You’re into that uncharted territory to break some of those hour paradigms,” he said.

Skydweller launched its flight test campaign in 2020, and has focused on installing and testing the autonomous systems tech since. He added that “in a very short horizon” the company will be test flying the autonomous aircraft, including take-off, full flight and landing, with future milestones focused on completing long-endurance flights. Customers will be able to start licensing the aircraft within a year to eighteen months, Parkes estimated.

Walnut Secures $2.5M in Seed Round Led by NFX to Enable Remote Sales