Twitter today is introducing a new feature that will allow accounts to self-identify as bots by adding a label to their profile. This feature is designed to help people better differentiate between automated accounts — like bots that retweet the news, public service announcements, or other updates — from those operated by humans. It’s not, however, designed to help users identify the “bad bots” which are those that pose as people, often to spread misinformation or spam.

The company has been contemplating labeling bots for years.

In 2018, Twitter CEO Jack Dorsey was asked during a Senate Intelligence Committee hearing whether he believed users had a “right to know” if they were speaking to a bot or a human on Twitter’s platform. He agreed that Twitter should add more context to tweets and was considering identifying bots, to the extent that it could. However, Dorsey also pointed out it would be more difficult to identify bots that were using scripting to give the appearance of being a human, compared with those that were leveraging Twitter’s API.

Last year, the company finally solidified those plans, saying it would later introduce new features that would allow users to be able to distinguish between human-run accounts and those that were automated. When Twitter launched its account verification system in May, it reminded users that it would soon offer other ways to identify different types of accounts beyond the long-coveted blue badge — such as labels for bots. 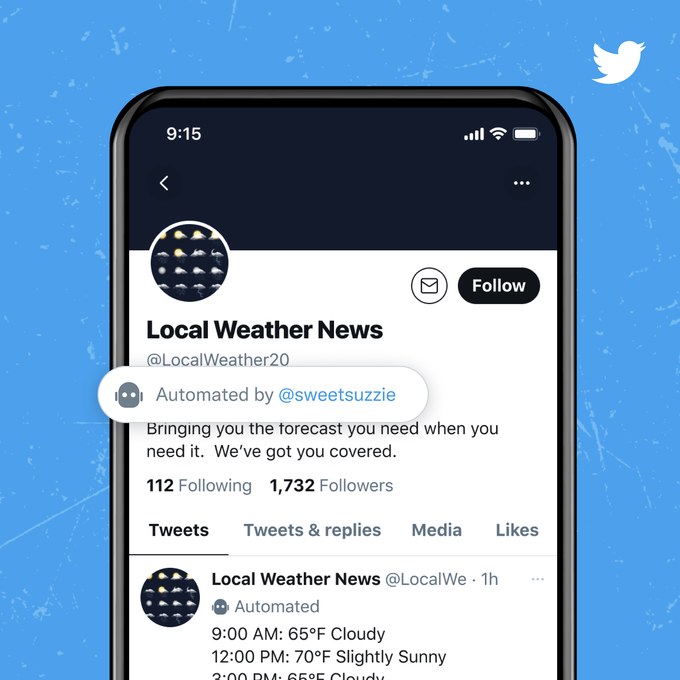 Today, Twitter says its new “Automated Account” label that identifies “good bots” will be made available to over 500 Developer Accounts. This group will test the feature and provide feedback before it’s opened up more broadly to all Twitter developers. As it’s still a test for the time being, the label won’t be required.

However, when Twitter updated its Developer Policy last year, it did ask developers to indicate in their account profile or bio whether the account was a bot, what the account is, and who’s behind it. These account labels would allow developers an easier way to comply with that policy rather than having to handwrite this information in their bio.

Twitter tells TechCrunch that based on what it learns during this experiment, it may decide to make adopting the label a requirement for all developers who run automated accounts in the future, once it becomes broadly available. 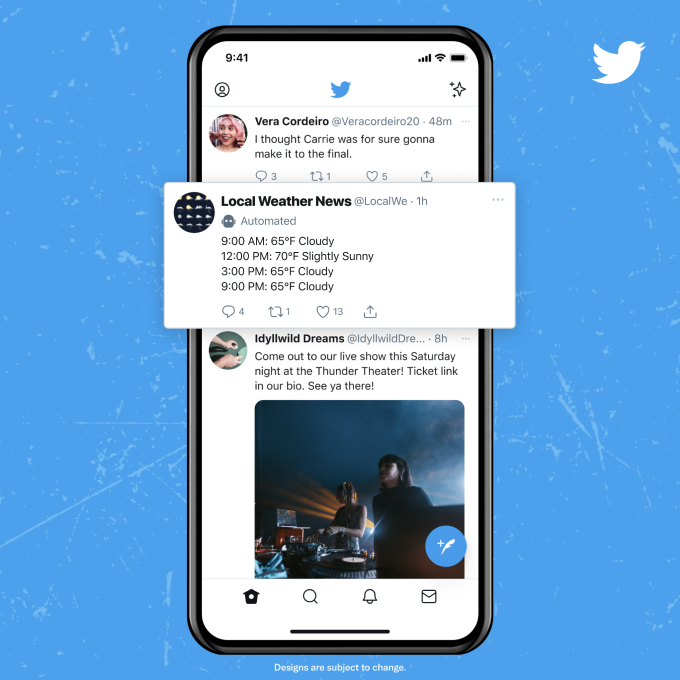 To be clear, Twitter doesn’t have any problem with those who run good bots, as it understands how automation can allow accounts to update people with helpful, relevant, or, sometimes, just fun information. The company even celebrated a few of its favorite bots when announcing today’s developer news, including the public service account @earthquakesSF; a bot offering COVID-19 updates, @vax_progress; a bot that offers an ongoing breakdown of the last 100 bills introduced in Congress, @last100bills; an accessibility-focused bot, @AltTxtReminder; and others that just add value in their own way, like @met_drawings, which shares public domain works from The Met’s Drawings & Prints department, or the goofy @EmojiMashupBot, among others.

All these will be a part of the initial test group.

The company has been on a tear lately in terms of rolling out new features. Just this week, it has launched Communities, tests of emoji reactions, support for full-width photos and videos, and a way to “soft block” followers, among other things.

Twitter has not said how long the test would run before the Automated Account labels are rolled out more broadly.