YouTube to pilot test shopping from livestreams with select creators

YouTube will begin pilot testing a new feature that will allow viewers to shop for products directly from livestream videos. The feature will initially launch with just a handful of creators and brands, the company says, and is an expansion of the integrated shopping experience YouTube began beta testing earlier this year.

That feature was designed only for on-demand videos, and allowed viewers to tap into the “credibility and knowledge” of trusted creators in order to make informed purchases, the company explained at the time. It said it would roll out to more creators over the course of 2021.

YouTube’s video platform, for years, has been a powerful tool for product discovery, as its over 2 billion logged-in users per month turn to the service to watch product reviews, demos, unboxings, shopping hauls, and other content that could inspire future purchases. But creators who wanted to sell from their YouTube videos would often have to promote affiliate links to online stores through the video’s description or in-video elements, like cards or end screens.

In more recent years, YouTube also introduced a merch shelf that would allow viewers to shop a set of specific products the creator selected.

The integrated shopping experience, meanwhile, allows viewers to shop the products shown in the video itself by tapping on a “view products” button, which brings up a list of the items being featured. 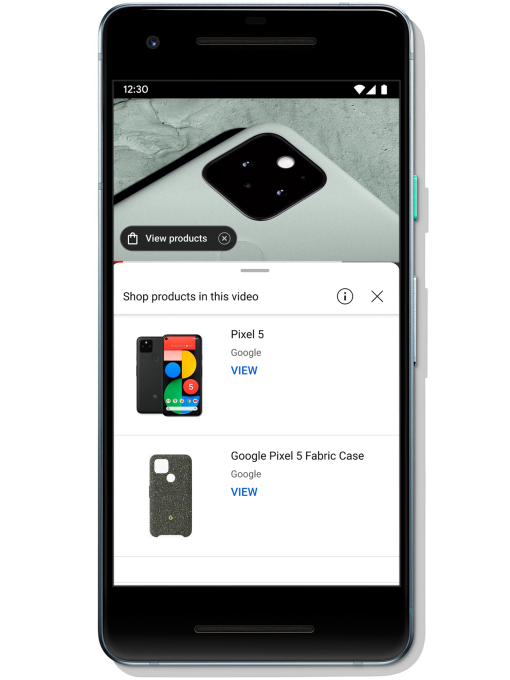 This feature allows YouTube to better compete with the growing number of video shopping experiences becoming available from both startups and competitors, including Facebook, Instagram, TikTok Pinterest, Amazon, and Snapchat. Many of those include support for livestream videos, too.

Over the past year, for example, startups like Bambuser, Popshop Live, Talkshoplive, Whatnot, and others have raised multi-million dollar rounds to invest in their own live video shopping businesses. Meanwhile, Facebook recently launched Live Shopping Fridays to test live shopping within the beauty, fashion and skincare space. And Walmart partnered with TikTok on livestream shopping events on multiple occasions.

YouTube’s own interest in this space has been heating up, as well, as just this week the company announced it was acquiring Indian video shopping app Simsim — an indication of Google’s interest in further integrating video shopping experiences into its own platform. Google also integrated video shopping into its Shopping search business, which included one effort from Shoploop, a video shopping product that graduated from Google’s in-house incubator, Area 120.

The expansion of YouTube’s integrated video shopping experience was announced today alongside other new Google Shopping features, including the addition of new section that organizes deals and sales on Google’s Shopping tab, which will be free for merchants who want to list.

Cyber Monday: up to $12.7B will be spent online, marking biggest-ever US shopping day

Gillmor Gang: Nothing Was Delivered

The life cycle of a viral product